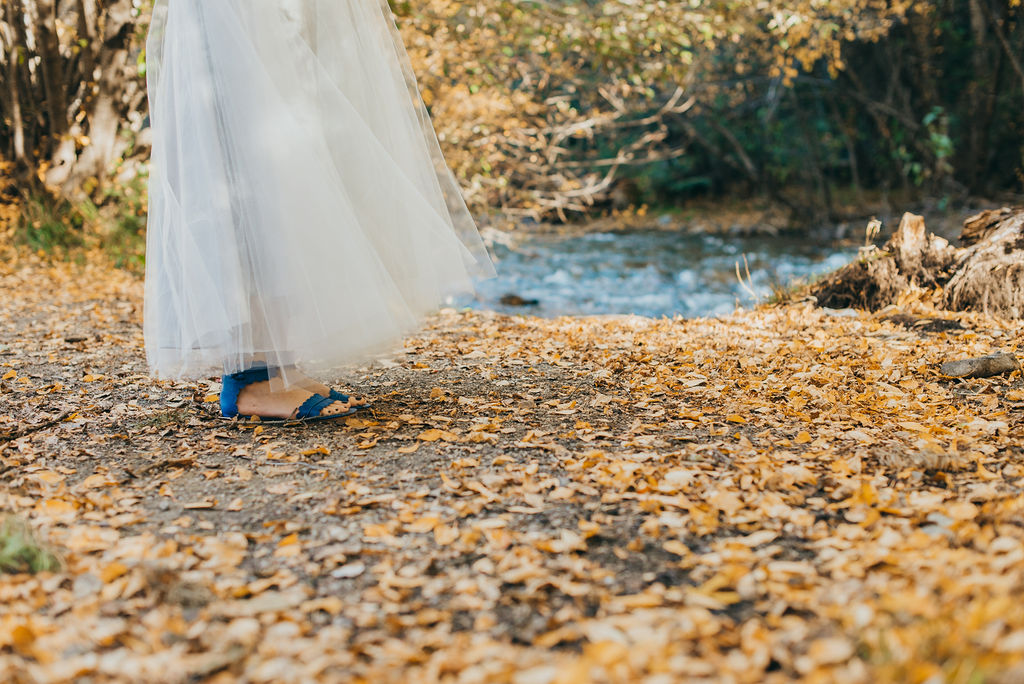 Renée began writing poetry about and for Amy even before their first date. They had met in the summer of 2015 at a local brewery and Amy immediately won Renée's attention with her sassy banter. They then connected over their matching arrow tattoos on the same arm in the same place. Many months later, Amy reached out with a plan and an invite; she had purchased two tickets to a Portland Cello Project concert for November. After months of bumping into one another, they had their first date. Sparks flew again, and after several more dates, bonding
over never-ending conversations about mutual interests in music, travel, books, poetry, and a fondness for adventuring outdoors, they were a couple.

In the autumn of 2016, Renée planned a trip to Austin, TX to see Amy's ultimate bucket list band, Radiohead. Little did Amy know, there was much more in store! On October 8th, Renée took Amy for a morning hike, followed by coffee and dessert, and a proposal! Renée handed Amy a book of poems that had been in the making since shortly after they met. Inside it was filled with poetry written just for her, and hidden in the back engraved on an antique spoon read the words "will you marry me?" and of course, Amy said yes.

When we were planning our wedding, we knew we wanted it to be an intimate adventure ceremony, an elopement. At first, we were planning for only ourselves and a photographer to travel to a state where we could wed ourselves. We knew we wanted a beautiful mountain backdrop, as we spend so much time camping, hiking, traveling, and backpacking. Then the more we discussed it, we realized that we wanted to be able to share our day with some of those we hold dearest. We decided to move the elopement closer to home, to Taos, NM where Renée's 92-year-old grandfather lives so he could attend also.

We kept the ceremony very simple and small, as we had always wanted, and planned for a larger backyard celebration the following weekend at Renée's mother's home in Albuquerque, NM. Our closest friends and a few family members from each side joined us for our wedding day at the edge of the Rio Grande River Gorge during a beautiful autumn evening on October 8th, 2017. My dear friend Ashley acted as officiant, a promise made many years ago when Ashley was the first person I came out to as gay, long before marriage equality in the USA.

We did not want to have anything elaborate at our ceremony, as we wanted the focus to be on the gorgeous surroundings and each other, so we only brought a rug to stand on as a couple. We put thought into our attire, special ordering many details, and each picking a gift to send each other on the day of the ceremony along with a hand-written letter. We also asked each person attending to pick out a poem to bring with them to recite at the ceremony. Renée and I wrote half of our vows together and half individually, beginning and ending our vows with the same lines but speaking about our unique love for one another in the middle. We also each chose a poem to read to each other, Renée's, naturally being her own poem from the book she proposed to me with.

The day before the ceremony, we all road-tripped and stayed together on the family property. As we drove to Taos, Ashley asked Renée and I questions about our relationship, love and what marriage meant to us as we finalized the ceremony script. We also added a few quirky additions like a surprise rock paper scissors contest for who read their vows first. There was nothing about our ceremony that wasn't perfectly us.

The next morning, I made breakfast for everyone and then we all explored Taos until the afternoon when we began to get ready. Before the ceremony, Renée and I not only exchanged gifts and letters while getting ready, we decided to also have a moment to ourselves in the mountains. Renée was getting ready in one family home with the help of our friend Kale and I was getting ready with Ashley and my sister, Rosetta, in the other house. So, we had friends drive us up separately to the Taos Ski Valley for a reveal. Both of us had been so nervous all day and I
am so glad that we decided to do the reveal in the mountains first. Immediately my nerves were gone when I turned to see Renée and only excitement remained. We drove to the ceremony site together, followed by our family.

We started our ceremony with the sharing of poems, all gathered in a circle at the edge of the river gorge with the mountains in the background. Each poem was so thoughtfully chosen and reflected the love that surrounded us. There wasn't a dry eye to be found. Renée's grandfather read from a book in both English and Spanish that he used to read to his late wife, also my favorite poet, so Renée's Grandma, too, was with us. It was a very moving moment that we will always treasure. We followed that with rock, paper, scissors and laughs when I lost. I had my younger sister carry Renée's ring, and Renée's cousin carried mine, which we exchanged at the same time as our vows.

One of our favorite moments came after Ashley announced us wed when a pack of coyotes down in the canyon joined in the cheers of our friends and family and serenaded us all back with their howls. We also followed the ceremony with a toast and when I popped a bottle of champagne that had traveled up to our high elevation with us, the cork flew so far into the gorge that it looked like it could very well have landed on the other side. More cheers and laughter all around!

Looking back, there is not a single thing we would have changed or did differently for our ceremony. Having our celebration a full week later turned out to be a stressor and we would have had them closer in hindsight, but the ceremony was perfection. We do not regret the simplicity or keeping it small. It was intimate, every bit the two of us, and so very full of love. The setting was breathtaking, and it is a place we can revisit often and easily.

Everything was beyond meaningful! We were able to be fully present, along with all of those surrounding us, and relish each detail. After the wedding, Renee and I stopped at the house to grab our overnight bags and whisked ourselves away to a romantic dinner alone flowed but a cozy fireplace lit stay in a yurt in the mountains. 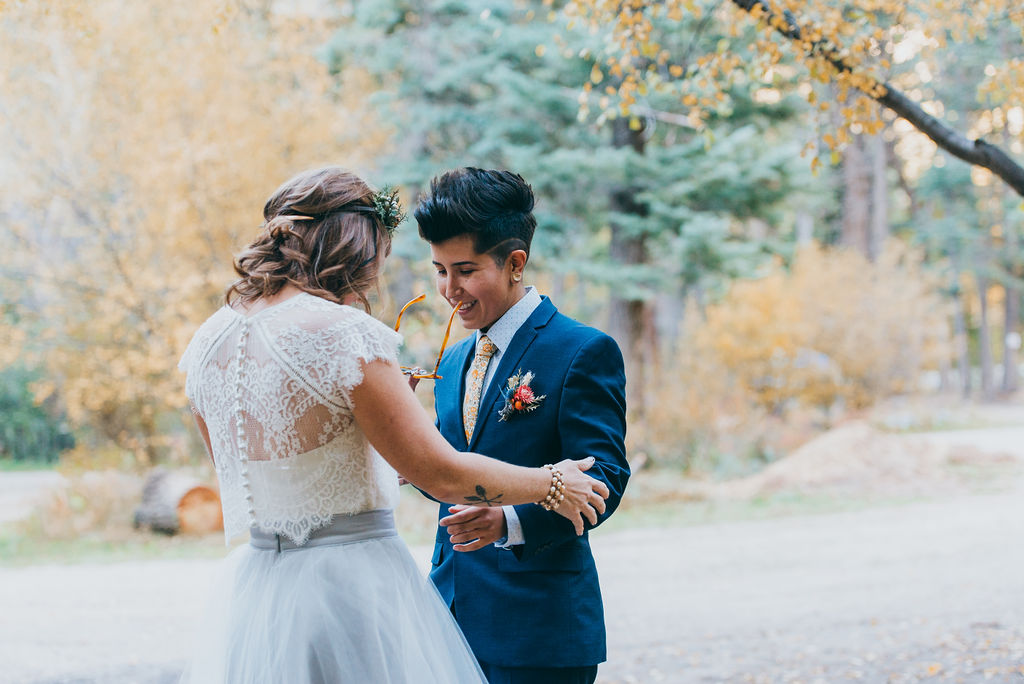 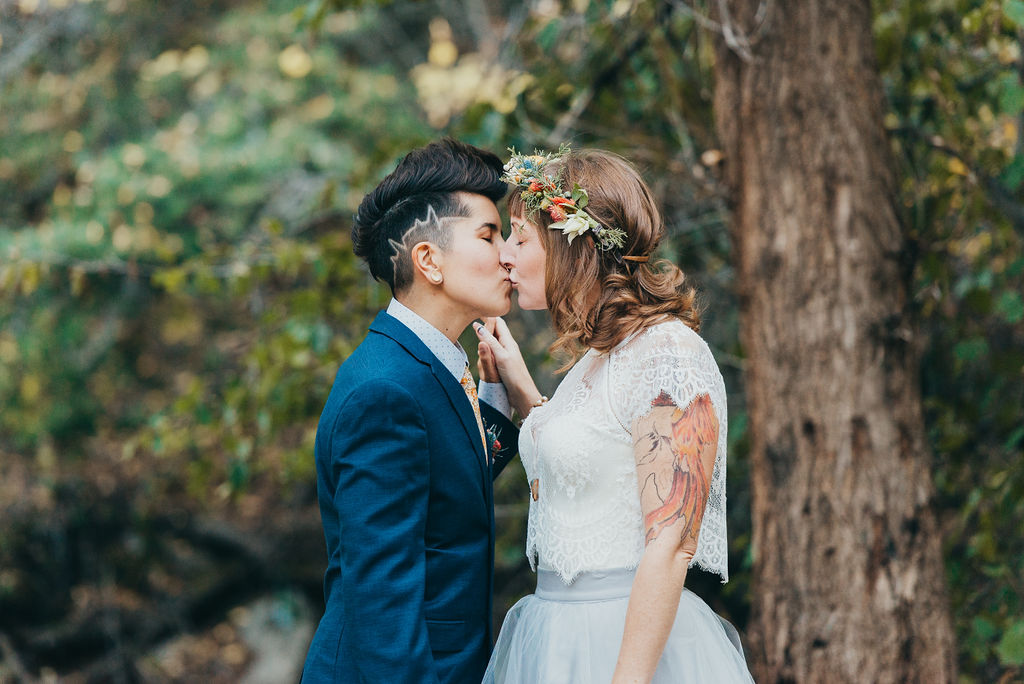 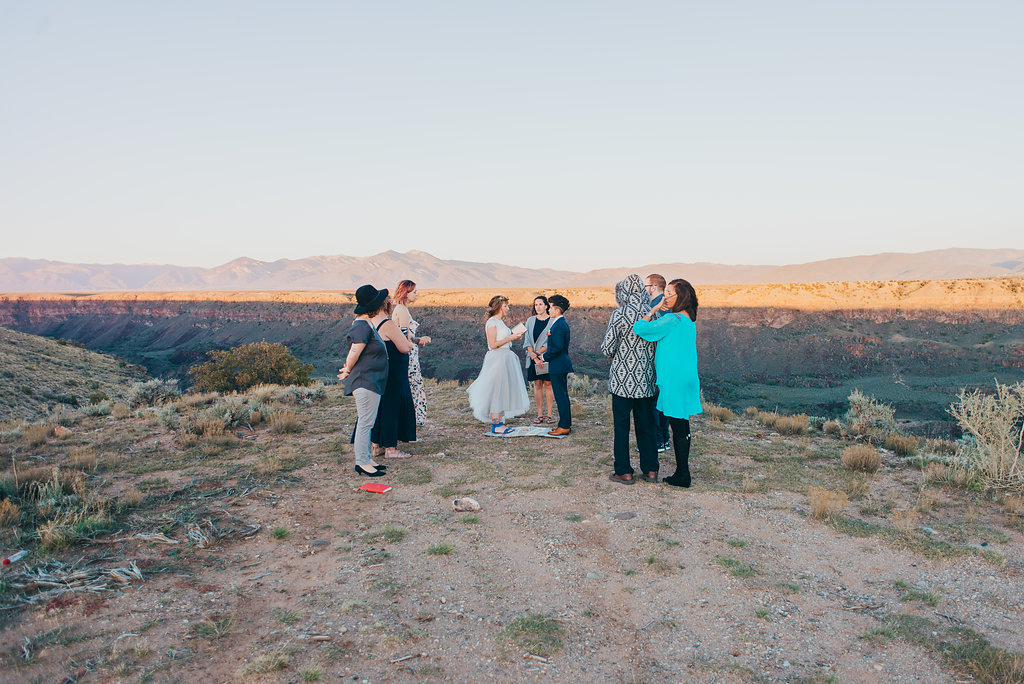 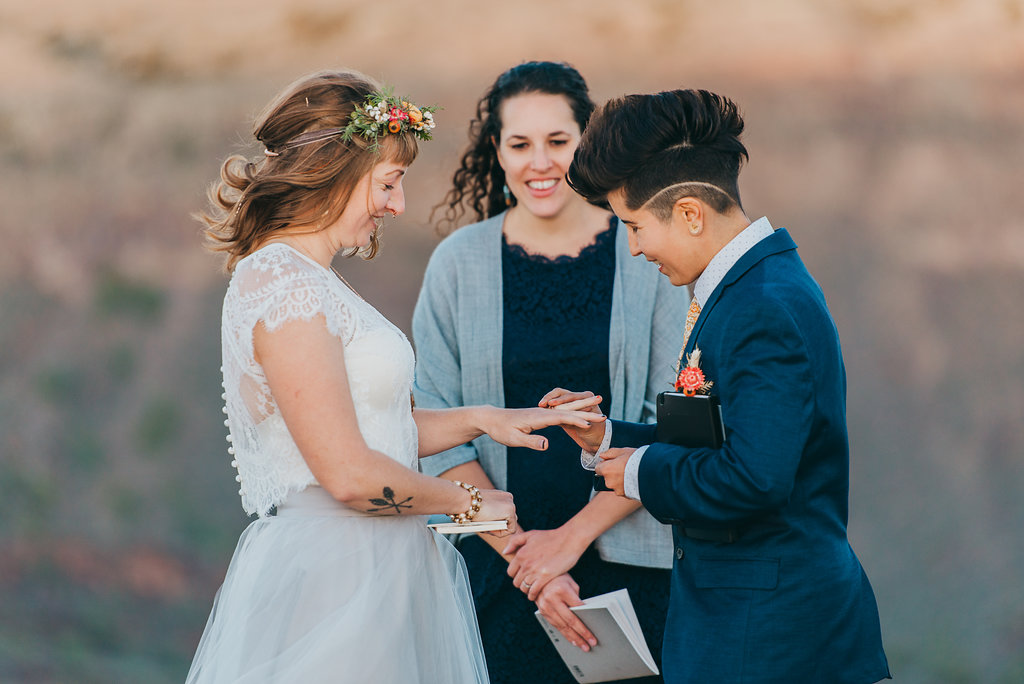 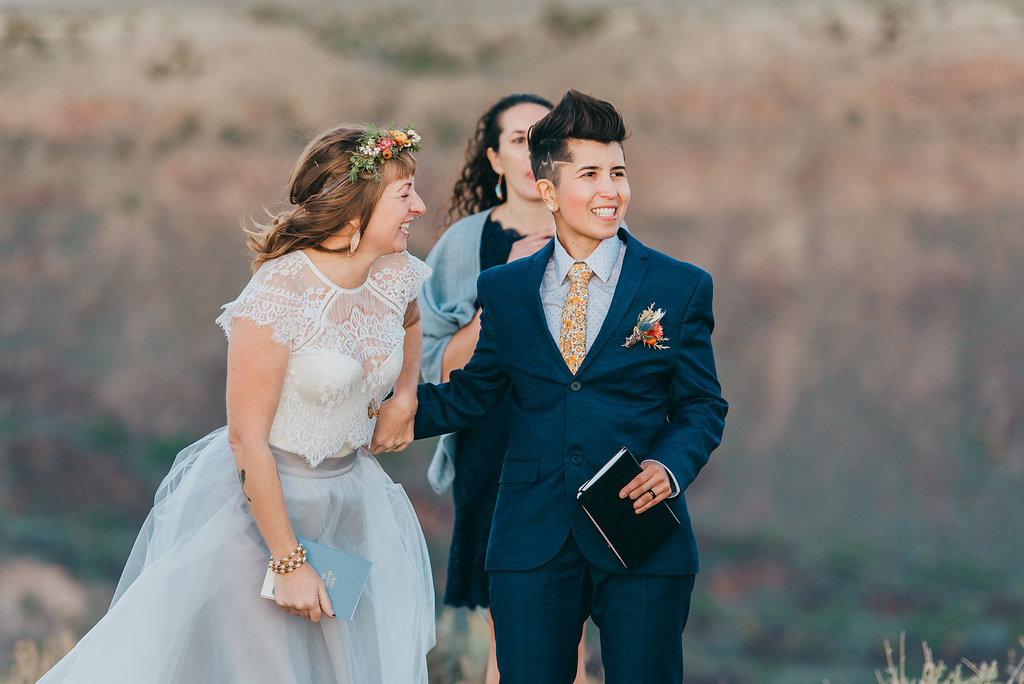 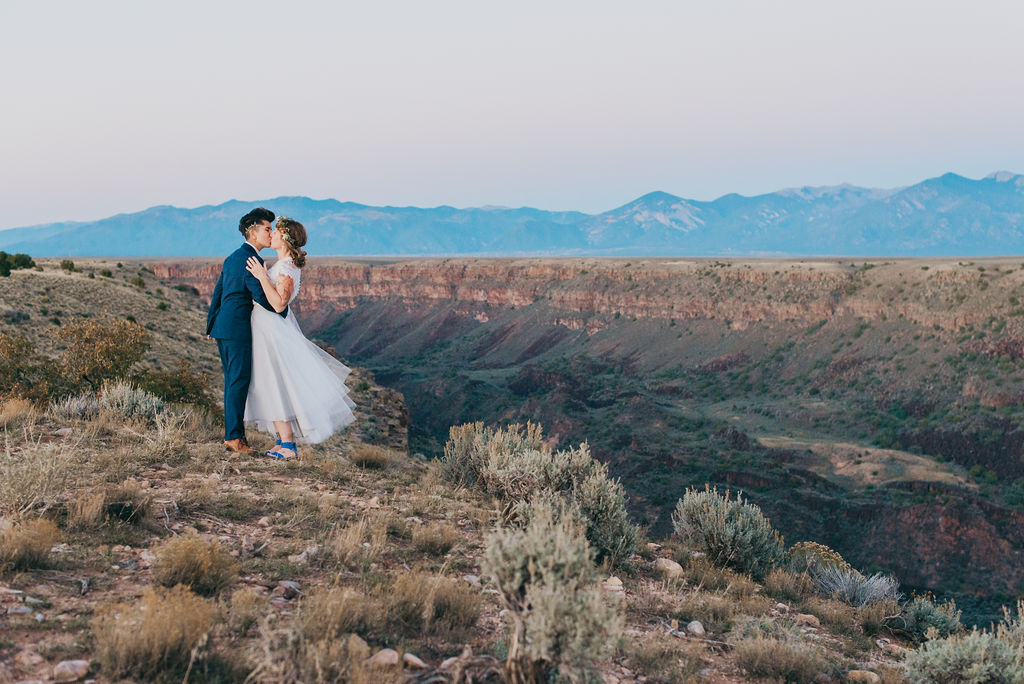 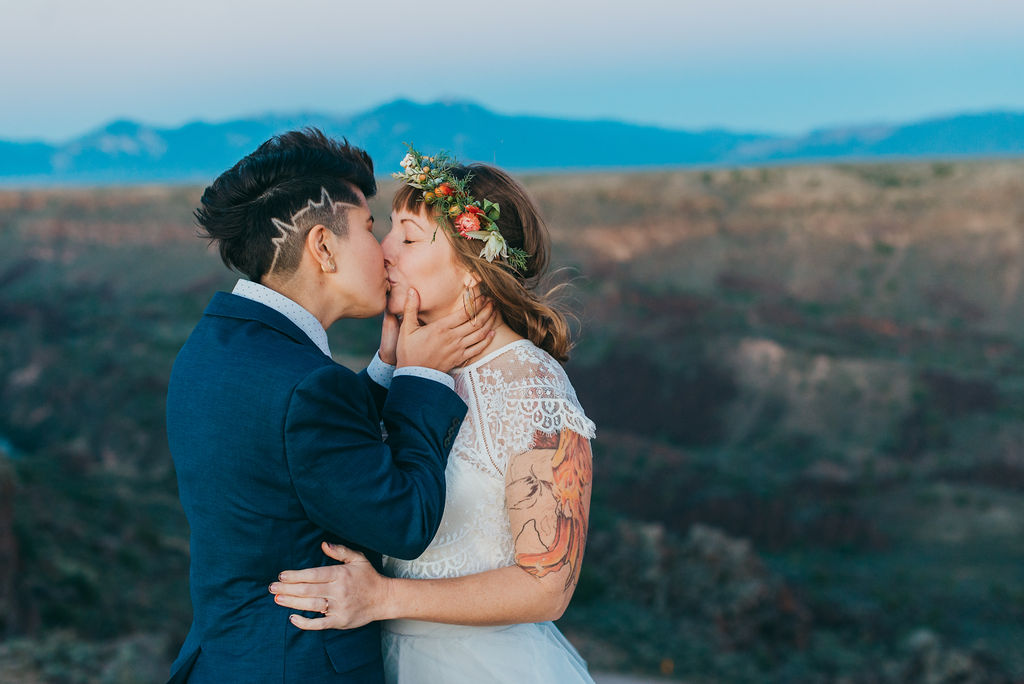 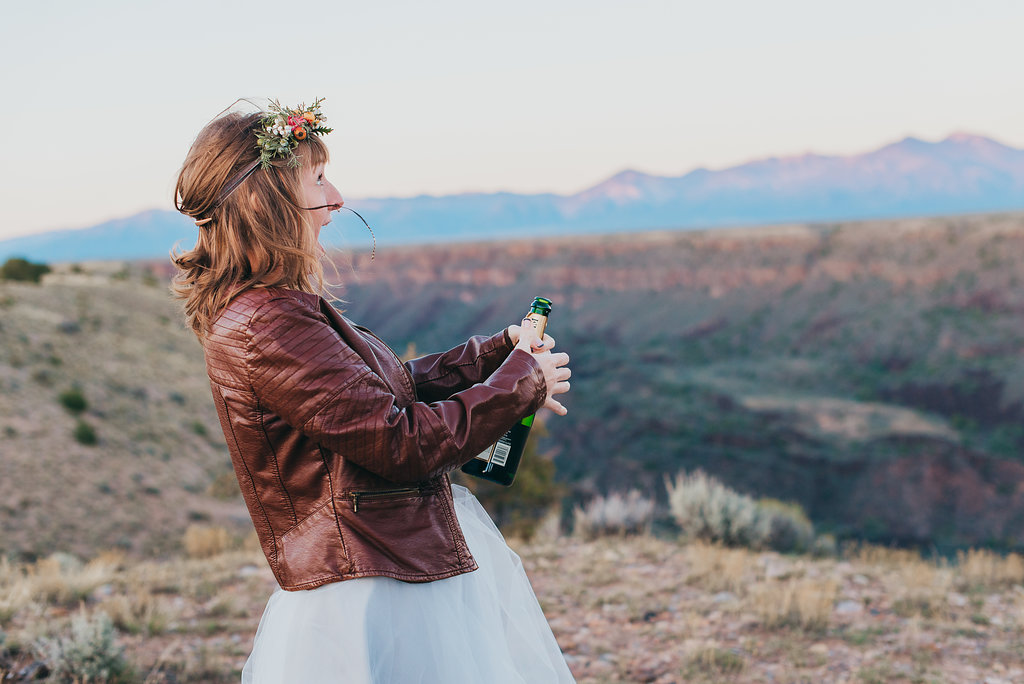 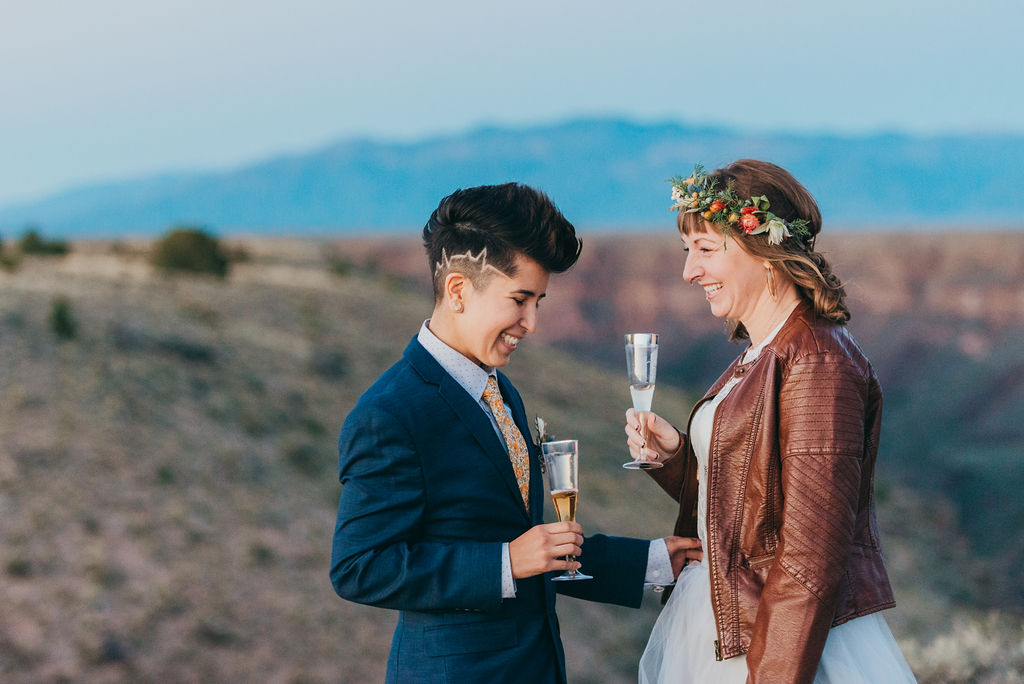 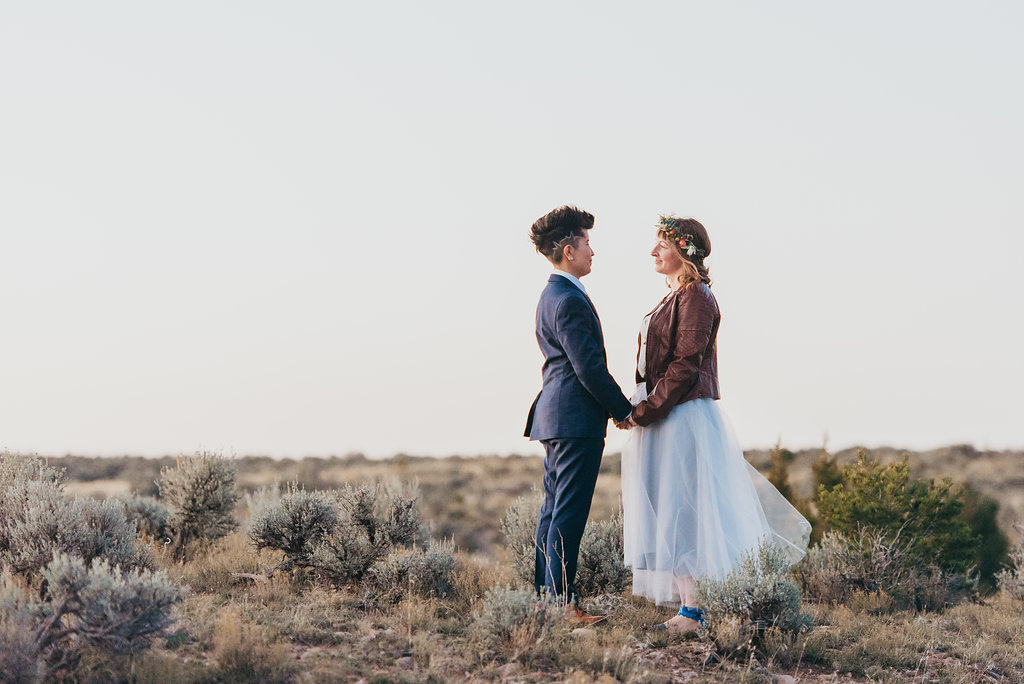 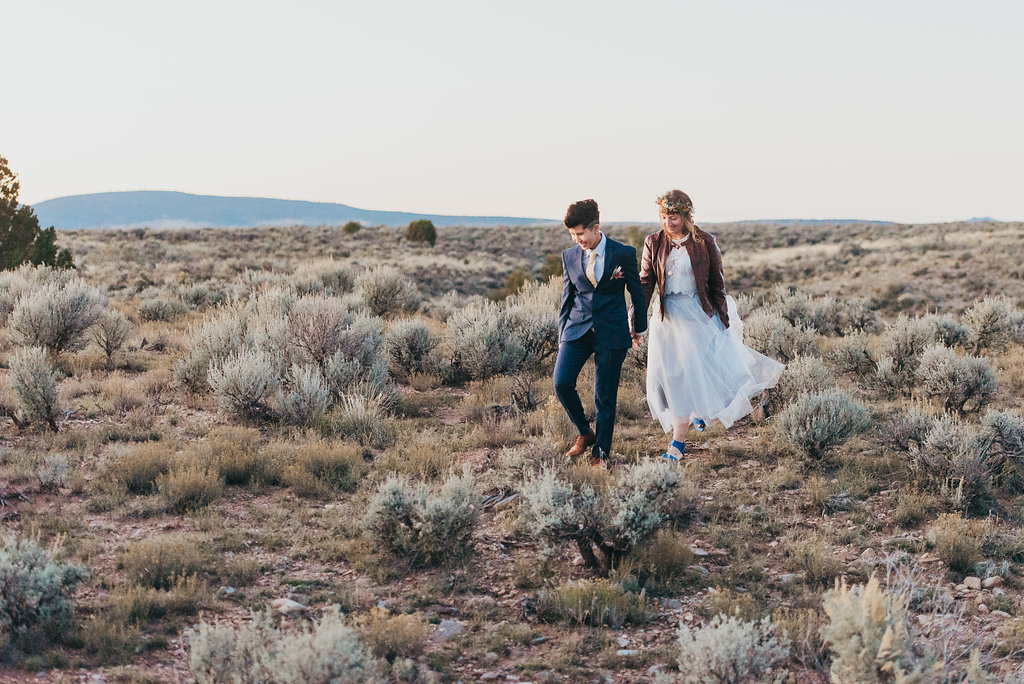